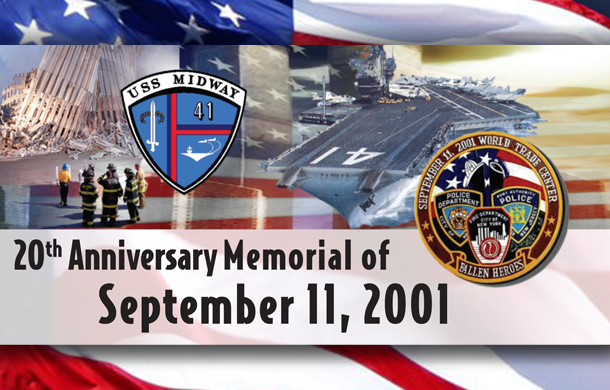 On this twentieth anniversary of the terrorist attacks at the World Trade Center, the FDNY Retirees of San Diego, along with the USS Midway Museum, National City FD and The Wounded Warrior Project will pay tribute and honor our fallen heroes and keep our promise to “NEVER FORGET”.

(Parking is not free. Car pooling is encouraged)

Following the Memorial Service, family and friends are invited to a FREE dinner reception at the Pioneer Hook and Ladder Firehouse Museum, located at Columbia and Cedar Streets, San Diego.

Presentation of Colors by

We need volunteers to read the names of our fallen heroes. RSVP by Sept. 9

(Limited number of slots. Volunteers must be on the flight deck no later than 1:00 pm in order to participate.)