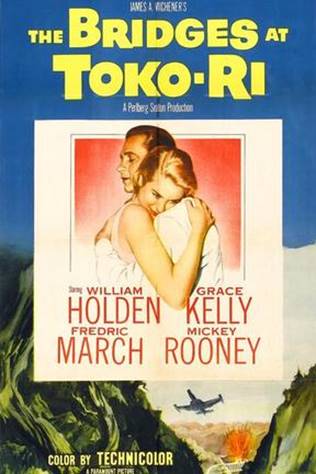 THIS EVENT IS SOLD OUT.

Midway Members! Join us on Thursday, November 8, 5:30-8:30 pm for a tribute showing of the film “The Bridges at Toko-Ri” to commemorate the 65th anniversary of the end of the Korean War.

Arguably the best Hollywood portrayal of carrier aviation to date, this 1954 film stars William Holden, Grace Kelly, and Mickey Rooney in a dramatic story of disrupted lives in the war-torn Far East. Filmed aboard the USS Oriskany, the flying sequences are stunningly authentic in portraying carrier aviation struggling to master jet and helicopter technology. Also, unlike other aviation films, the non-flying segments are diverting as well with a hilarious glimpse of liberty in 1950s Yokosuka.

Other stars include our very own Panther jet, HO3S helicopter, and Skyraider aircraft in their prime. Look carefully, and you will see a cameo from the Midway’s own VFA-192 “World Famous” Golden Dragons back when they flew Panther jets!

So, it’s “wheels down, flaps down, hook down” on this special night.  We will honor all Korean War Veterans in attendance.

Must be an active USS Midway Museum Member to attend this event.

Hop onboard to hear about upcoming events, exclusive offers and ship stuff!