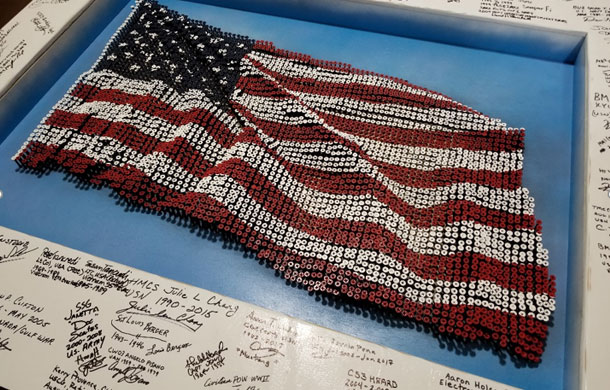 In 2001, he reported to MSC PAC 119 stationed in San Diego, California.  He was then assigned to Expeditionary Maintenance Detachment Lima in Point Loma in support of the USS Frank Cable AS-40 in Guam in 2004. In February 2007, he mobilized to Kuwait to support United States Navy Customs. Since Jan 2012 he has been recalled to Command Submarine Squadron Eleven yearly as their Foreign Liaison Officer working with the Chilean and Peruvian submarine commands.

He currently serves as the Senior Enlisted Leader for the Regional Operations Center, the ROC, in San Diego.

Chief Pisano’s art is considered “3D Industrial” and uses a variety of objects including drywall screws, dog tags and golf tees in the creation of his artwork.

His latest artoworks, “Stand Together” and “Forget Me Not” have yielded Most Creative Sculpture (First Place), Best of Show and Peoples’ Choice (2x) at the San Diego County Fair.

Click here for a complete listing of Midway’s Veterans Day celebration activities, both virtual and onboard!

IMPORTANT: This exhibition is included in museum admission. As a result of COVID-19 the museum is at limited capacity. Click here to purchase your ticket for Veterans Day in advance.