THE COLD WAR, KOREA AND VIETNAM 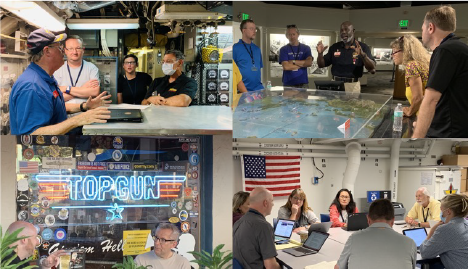 Come aboard the USS Midway Museum in beautiful San Diego this summer and join in a unique professional development opportunity for teachers of History and Social Studies!

This is the signature seminar of the Institute, held during the ongoing fiftieth anniversary of the extraordinary Vietnam War era, which was among the most cataclysmic and consequential eras in American history.

The Vietnam War did not occur in isolation. Today’s world has been shaped in many ways by the Cold War era and by the outcomes of the wars in Korea and Vietnam, and the challenges of our current era are still highly influenced by this history. Throughout this two-week program, teachers will gain knowledge, scholarly insight, and different perspectives on these extraordinary, crucial and divisive events in the post-WWII world.

During the first week, the focus is on Cold War antecedents and origins, the early Cold War, and U.S. leadership, the Korean War and its continuing ramifications understanding the Soviet Union and its allies, the initial stages of the war in Vietnam, and predecessor conflicts in Indochina, and key American domestic events and controversies in the 1950s and early 1960s.

In the second week, the emphasis is on the Vietnam War and recent interpretations, including disputes about the war’s conduct, anti-war protests, presidential authority and decision making, the dramatic end to the conflict, phenomenal changes in American society during the era, and the conclusion of the Cold War. Particular emphasis will be placed on the years 1968-1970, the period that represented the mid-point of major U.S. combat involvement in Vietnam, including the momentous battle of the Tet Offensive and its effects, tragic assassinations of highly important leaders, and convulsive events in America and around the world.

Eminent scholars share their insights, viewpoints, and cutting-edge research on the Cold War, Korea, and Vietnam, while pedagogical sessions allow teachers to exchange information and develop strategies to teach the material presented. Frequent discussion and interaction among participants and between teachers and Institute faculty are strongly encouraged.

Seminar participants also have the chance to explore the sights and attractions of the San Diego area. The seminar includes the July 4 weekend, and participants receive a special invitation to see the spectacular July 4th harbor fireworks show from the deck of the USS Midway. Participants will also be offered the exciting opportunity to stay overnight aboard the aircraft at no additional cost.

Expand and deepen their content knowledge.
Discuss approaches to teaching about the Cold War, Korea, and Vietnam.
Interact with scholars and colleagues and meet veterans of the Korean and Vietnam wars.
Receive books and other teaching resources.
Take private tours of the USS Midway Museum.
Receive a professional stipend, instructional materials, meals aboard ship, parking, travel support (for those outside the
San Diego region), and a professional development certificate.
Earn up to three optional credits from California State University, San Marcos.

Application Deadline is March 13th, 2022
Acceptance notices will be sent by April 1st, 2022

WORLD WAR II IN THE PACIFIC: CLASH OF NATIONS AND PERSPECTIVES 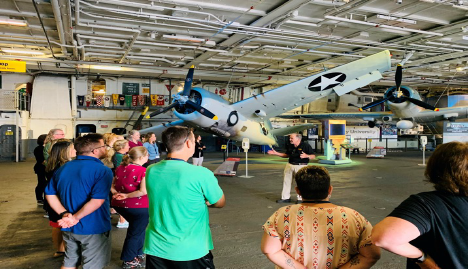 In this one-week program, World War II in the Pacific is examined from a number of varying perspectives. The Pacific War was a monumental clash of many nations and cultures, with significant repercussions and effects that reverberate to the present day, including the evolving relationships between the U.S. and numerous nations, and the presence of so many varied ethnicities from Pacific nations in America’s classrooms.

Despite its extraordinary impact, the Pacific War is the lesser understood side of World War Two. It is commonly seen as the war between America and Japan. But it was so much more. Affecting a large number of countries from 1937 – 1945, the war’s enduring effects played an extraordinary role in the subsequent history of all nations of the Pacific including the United States, and this impact continued to markedly influence the current course of events within and outside the region today.

This seminar features top scholars from notable universities sharing their research and points of view on such topics as the strategic conduct of the Pacific War on several fronts; the concept and practice of total war in the Pacific including China, Japan, and other nations; pre-and post-war colonialism and its effects; and other key military and non-military events, including the use of the atom bombs and the domestic transformation of the U.S. The chaos of the immediate post-war period is also discussed as well as the continuing conflict among Pacific nations about the public use of the war’s memories.

These discussions will help teachers gain greater understanding and insight not only on the battles and the course of the war, from South Asia to America’s shores, but also on its long term social, political, and economic consequences for public policy, military strategy, the Cold War, China, Korea, Vietnam, and current multi-national disputes, enabling teachers to bring new knowledge and broader perspective to their classroom.

Expand and deepen their content knowledge.
Discuss approaches to teaching about World War II in the Pacific and its key events, including the importance and impact of the wars’ aftermath, how the war is remembered, and stories from the war’s veterans.
Interact with scholars and colleagues and meet veterans of the Korean and Vietnam wars.
Receive books and other teaching resources.
Take private tours of the USS Midway Museum.
Receive a professional stipend, instructional materials, meals aboard ship, parking, travel support (for those outside the
San Diego region), and a professional development certificate.
Earn up to two optional credits from California State University, San Marcos.

Application Deadline is March 13th, 2022
Acceptance notices will be sent by April 1st, 2022

This roundtable discussion featuring three world-renowned experts will assess comparatively the end of America’s wars in Vietnam (1975) and Afghanistan (2021). It will explore actual and potential global fallouts of the U.S. withdrawal from Afghanistan, including refugee crises, on the basis of past experiences in Vietnam and the rest of Indochina. The questions & Answers session will follow the discussion.

Additional short webinars will be presented in winter and spring.
More information regarding those will be posted here in the coming months.

Sixty years after the Korean War, communist North Korea remains a baffling country. The secretive Kim dynasty’s absolute dictatorship has reigned since 1948, and now possesses nuclear weapons, yet little is known about them. Who are the Kim’s? How have they remained in power? What are their aims? And what should be taught about them?