In honor of the Moon landing’s 50th anniversary this month, this moth’s segment is about Neil Armstrong’s first brush with death during combat as a young carrier aviator in the Korean War! 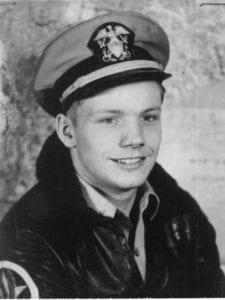 Fifty years ago, Apollo 11 commander Neil Armstrong and his lunar module pilot, Edwin “Buzz” Aldrin, landed on the Moon after a harrowing approach and an improvised touchdown with just seconds of fuel remaining.  Thanks to an overloaded computer, Armstrong was forced to guide their craft by eye and set down on the far side of a large impact crater.  This improvisation saved the mission and resulted in the first manned landing on the lunar surface.  Yet, this was not the first brush with danger the former carrier aviator overcame in his remarkable flying career.

On 3 September 1951, as a twenty-one-year old Ensign, Armstrong launched off the carrier Essex on his seventh mission to bomb a transportation complex near the North Korean port of Wonsan.  Assigned to fighter squadron VF-51, Armstrong flew his F9F Panther jet as wingman to Air Force exchange pilot Major John Carpenter, who led the Essex flight.  Lugging a pair of 500-lb bombs each, the jets climbed over the mountainous enemy coastline and came across the heavily defended target.  Seeing vehicular traffic on a bridge, Carpenter called for an attack run and rolled in.  Armstrong followed, strafing with his 20mm nose cannon.  After pulling up, Carpenter noticed the bridge span still stood, so he called for a second run as communist anti-aircraft fire intensified.

Ensign Armstrong dove low on this pass before dropping his remaining bomb, and began his climb over a ridge line 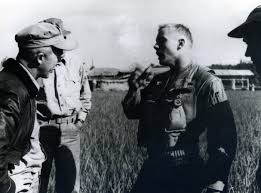 ahead when he discerned a steel cable strung between poles right in his path.  Before he could react, his plane shook violently and pitched downward.  Armstrong discovered nearly half of the outer section of his starboard wing sheared off.  When attempting to pull away from the onrushing hill, he then noticed his elevator response was sluggish.  Switching to trim tabs, his managed to clear the ridge, but establishing stable flight was a challenge.  Fortunately, the remaining wing area of the planked-wing Panther provided enough life to keep the crippled jet airborne, so long as Armstrong kept his speed above 250 knots.

To manage level flight, Armstrong applied constant left aileron to keep his intact wing down, and drained his port tip tank to reduce the asymmetrical weight.  He contacted Major Carpenter who detached from the flight and flew alongside.  Since a return to the carrier was out of the question, Carpenter guided Armstrong south out of enemy territory towards South Korea.  Because of the stability problem, the pilots agreed that an emergency landing was impossible, and a risky high-speed ejection was the only option.  Armstrong radioed that he preferred parachuting over water in the Sea of Japan rather than landing on the rough Korean terrain, so the two Panthers followed the coastline.  An option was to make the ejection near the Marine airbase at Pohang, known as K-3, which had helicopters and was near the shoreline.  However, that involved another hour’s flight time to reach the Marines near the southeastern corner of Korea.

Keeping his speed up, and holding the stick jammed to the left, Armstrong climbed and coaxed his shattered jet to 14,000 feet.  Eventually, the mountainous coast line indented and revealed the hook of Pohang Bay.  With Carpenter reciting the ejection preparations, Armstrong readied himself for a violent departure.  The early ejection seat technology in the Panther employed an explosive charge to drive the pilot and his seat upwards and out of the cockpit.  Unlike later rocket-driven seats, the shock of the acceleration was concentrated at the start of the separation.  A pilot needed to be set into his seat exactly to moderate his injuries.  Additionally, his feet and legs needed to be brought right up against the chair to avoid impacting the instrument console on the trip out.  Compounding Armstrong’s predicament was the high flight speed his jet needed to remain marginally stable.  The chair would shoot upwards in a trajectory defined by the rails in the fuselage, but the powerful slipstream would take over as soon as the chair and occupant cleared the sill.  Having only a little drogue chute to deploy and stabilize the chair, the pilot still needed to release his straps and pitch himself forward out of the seat, clutching his parachute D-ring.  Regulations called for a five second delay before pulling the rip cord, and only then would the pilot make a moderate descent.

On Carpenter’s command, Armstrong jettisoned his canopy.  He then pulled the stick back gingerly to enter a gentle climb and sat up as straight in his chair as he could, and pulled his feet back onto the foot rests.  With his seat oxygen bottle activated, the young Ensign reached up and pulled the seat firing curtain down over his face.  The ejection charge shot his chair straight up instantly with a 22-g acceleration.  The powerful slipstream immediately flung him backwards, his feet rolling above his head in a seated summersault.  Fortunately, he cleared the jet’s tail.

After what seemed an eternity, the drogue chute shot out from the tumbling seat, and its small canopy deployed to stabilize the plunging chair.  Armstrong felt the jerk and unclenched the face curtain, fumbling for the release on his seat straps.  Unfettered, he pitched himself forward into open sky, right hand on the rip cord.  Despite the tumult, Armstrong remembered the five-count from the checklist and sang out the countdown.  At five, he yanked the d-ring, and felt the canopy deploy above him.  Grabbing the risers, he floated downward, but the wind bore him inland, away from a seaward splashdown.  Seconds later, he saw a boggy rice paddy slide beneath him, and soon he was flat on his back in the muck.

Shrugging out of the parachute harness, he saw a jeep speeding towards him, and was surprised and delighted to see a flight school classmate, Marine Lieutenant Goodall Warren, behind the wheel.  Back at K-3, he described his mission to the Marines, and spent the night as their guest.  The next day, a helicopter returned him to the Essex.  Ensign Neil Armstrong went on to complete seventy-one more combat missions over Korea.  After leaving naval service nearly a decade later, he became one of the first civilian astronauts, and commanded the ill-starred Gemini 8 which made an emergency landing after a stuck thruster put him and fellow astronaut Dave Scott into a violent roll.  While preparing for the Apollo mission, Armstrong was again forced to eject when the lunar landing trainer, essentially an upturned jet engine, tipped out of control.  Yet these trials served him well in becoming the first human to set foot on the Moon.

That’s all for now, Midway Family! Please leave me a comment below and tell me what you thought of this month’s Karl’s Korner. Did you know about Neil Armstrong’s service in Korea? Leave me a comment and let me know!