Hello, Midway Family! Welcome back to “Karl’s Korner”, a historical segment written by myself, Karl Zingheim – Ship Historian of the USS Midway Museum.

In honor of both Women’s History month, and the recent passing of Rosalind Walter, who inspired the “Rosie the Riveter” wartime song, I wanted to look back upon the immense female contributions to America’s war effort in World War II. I invite you all to look back with me…

The sheer scope of the global conflict in World War II demanded an unprecedented draw on manpower, particularly among males in the prime working age ranges.  The armed services, the merchant marine, and critical war-related industries required millions of able-bodied men, although it took several months after Pearl Harbor for the resulting labor shortages to be felt at home.  Compounding the staffing problem in the armed forces was a compelling need to replenish and maintain combat units at optimum manning levels.  These circumstances opened the door to extraordinary opportunities for women to participate in public service and contribute directly to the nation’s war effort.

The purpose of female wartime employment in America was largely to either fulfill roles left vacant by men now serving in uniform, or to free manpower for assignment to combat roles, a realm strictly denied to women.  The masculine rush to volunteer was soon followed by the draft, and with war industries expanding rapidly, the production lines required new sets of hands.  Shipyards, aviation manufacturers, munitions plants, and even converted peacetime industries, like sewing machine and toy train firms that now made pistols and bombsights, turned to women and minorities like never before.  Even the widow of Confederate General James Longstreet, Helen, clocked in at a Bell Aircraft plant in Georgia.  Labor-intensive tasks such as riveting and welding, and forge casting and milling, were opened to females on the assembly line, although practical adjustments were needed, such as the enforcement of head coverings to prevent lethal accidents with long hair and rotating machinery.

Peacetime labor that still required attention in war, such as farming, lumber, and operating train lines, saw more women employed to make up for missing men.  Other tasks, such as civil defense roles, supplementing fire and police agencies, and supporting the United Services Organization (USO), required female volunteerism from coast to coast.  However, even with such widespread use of women to support the war effort, there were few organized attempts to ameliorate the continuation of home life, such as daycare for children, but stores and groceries did extend their hours to accommodate late-shift war workers.  Furthermore, many war employers paid their female staff lower wages, although the much higher-paying munitions work never suffered for women on the assembly line.

Women’s Army Auxiliary Corps and Beyond

Within months after the war began, the U.S. Army realized it needed a pool of personnel to ease more men away from supporting tasks and into combat assignments.  The Women’s Army Auxiliary Corps (later, WAC) was founded in May 1942 under the direction of Olveta Culp Hobby.  Having a background in public relations, Hobby maintained strict admission standards, and demanded complete adherence to Army regulations among the enlistees to ensure a positive public image for women in uniform.  Some 143,000 women joined the WAC, and served in over 200 non-combat roles, including truck driving and maintenance, and surveying.

Weeks after the WAC began, the other services created female counterparts.  University president Mildred McAfee founded the Navy’s Women Accepted for Volunteer Emergency Service (WAVES), and diligently built up a force of some 18,000 female naval officers and enlisted personnel, quite apart from the Navy Nurse Corps.  McAfee ensured that African-American women could serve in the same capacity as white women, sooner than their male counterparts in the Fleet, and permitted the use of female instructors in gunnery.  Unlike the Army, which sent WACS overseas to combat theatres, WAVES, however, largely remained stateside, getting no closer to the fighting than Hawaii in 1944.

As a part of the Department of the Navy in wartime, the Coast Guard also opened its ranks to women in November 1942.  College dean Dorothy C. Stratton transferred from the WAVES to found the service’s SPARs program, an amalgamation of the Coast Guard’s Latin motto Semper Paratus, and its English translation, Always Ready.  More than 11,000 women served as SPARs, the highest percentage of female participation in the uniformed services.  At the beginning of 1943, Ruth Cheney Streeter started the Marine Corps Women’s Reserve after being repeatedly rejected by the Army Air Force (AAF) program because of age.  By War’s end, Colonel Streeter administered a force of over 18,000 female Marines across the United States. 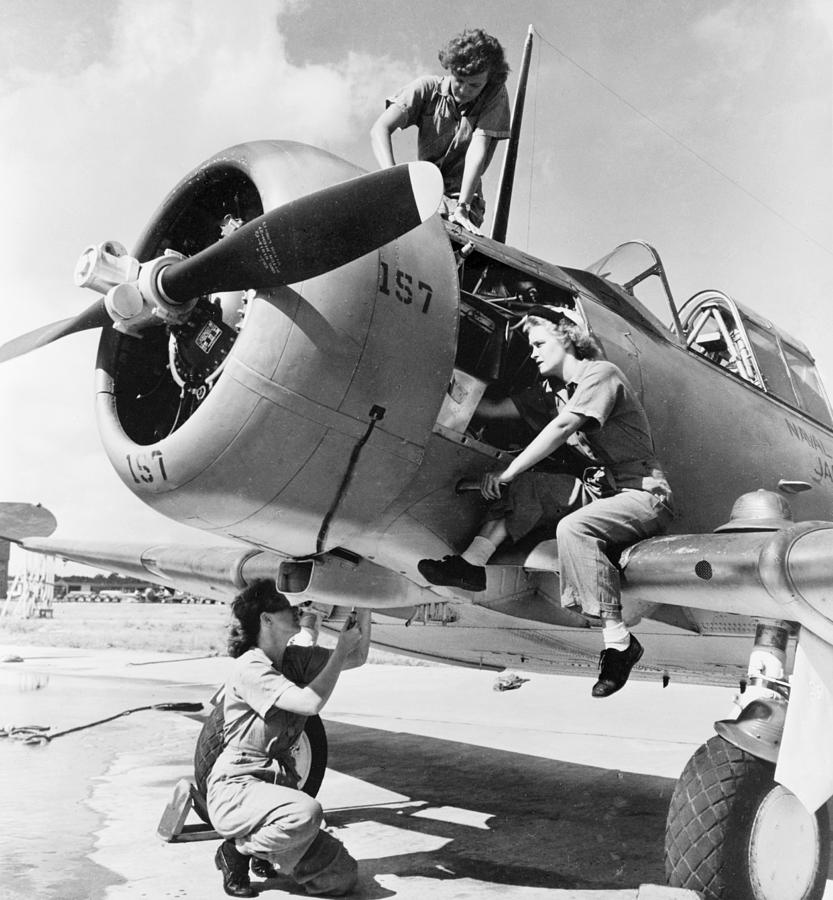 The involvement of the AAF in female contributions to the war effort was much more complex than for the other services.  Noted aviatrix Jackie Cochrane secured approval for American women pilots to help ferry combat aircraft to Britain before the U.S. entered the conflict.  When war finally drew in America, the AAF decided that its nascent female ferrying service would not become a part of the WAC, but neither would it become a true part of the AAF.  Instead, the women pilots were technically civilians paid a modest monthly stipend.  Eventually, two existing female flying programs were merged into the Women Airforce Service Pilots (WASPs) in July 1943. 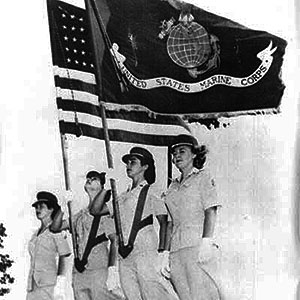 Ironically, unlike their sisters-in-arms in the uniformed services, the civilian WASPs routinely risked their lives in flying newly-made military aircraft from factories to airbases, or on lengthy delivery flights.  In fact, 80 percent of all ferrying flights were performed by women.  The number of pilots varied, but the WASPs freed some 900 male pilots for combat roles overseas.  Thirty-eight WASPS died in the line of duty, but as civilians, there was no military funeral or gold star window display for their families.  Because of resistance from male civilian pilot programs, and a glut of male AAF pilots later in the war, the WASP program was shut down in December 1944.  The former WASPs were denied veterans’ status until 1977.

Whether through manufacturing, replacing men in the fields and railyards, volunteering, or serving in uniform, the women of America contributed substantively to sustaining the war effort.  Their combined support stateside, and in limited roles overseas, ensured the maximum effort by the fighting forces could be maintained in every fighting theatre around the globe.  Even after the postwar transition, the expanded employment and service roles for women shown in World War II changed the course of the future generations encouraging women to aspire to even greater career opportunities than ever before.

Thank you for reading, Midway Family. I hope you enjoyed learning about the role of American women in WWII and the rise of the iconic “Rosie the Riveter” symbol. Please leave me a comment below and tell me what you thought of this month’s Karl’s Korner. How are you celebrating and recognizing the women who have paved the way this month (and everyday) ? We hope you are all staying safe and healthy during these uncertain times. We will get through this together.