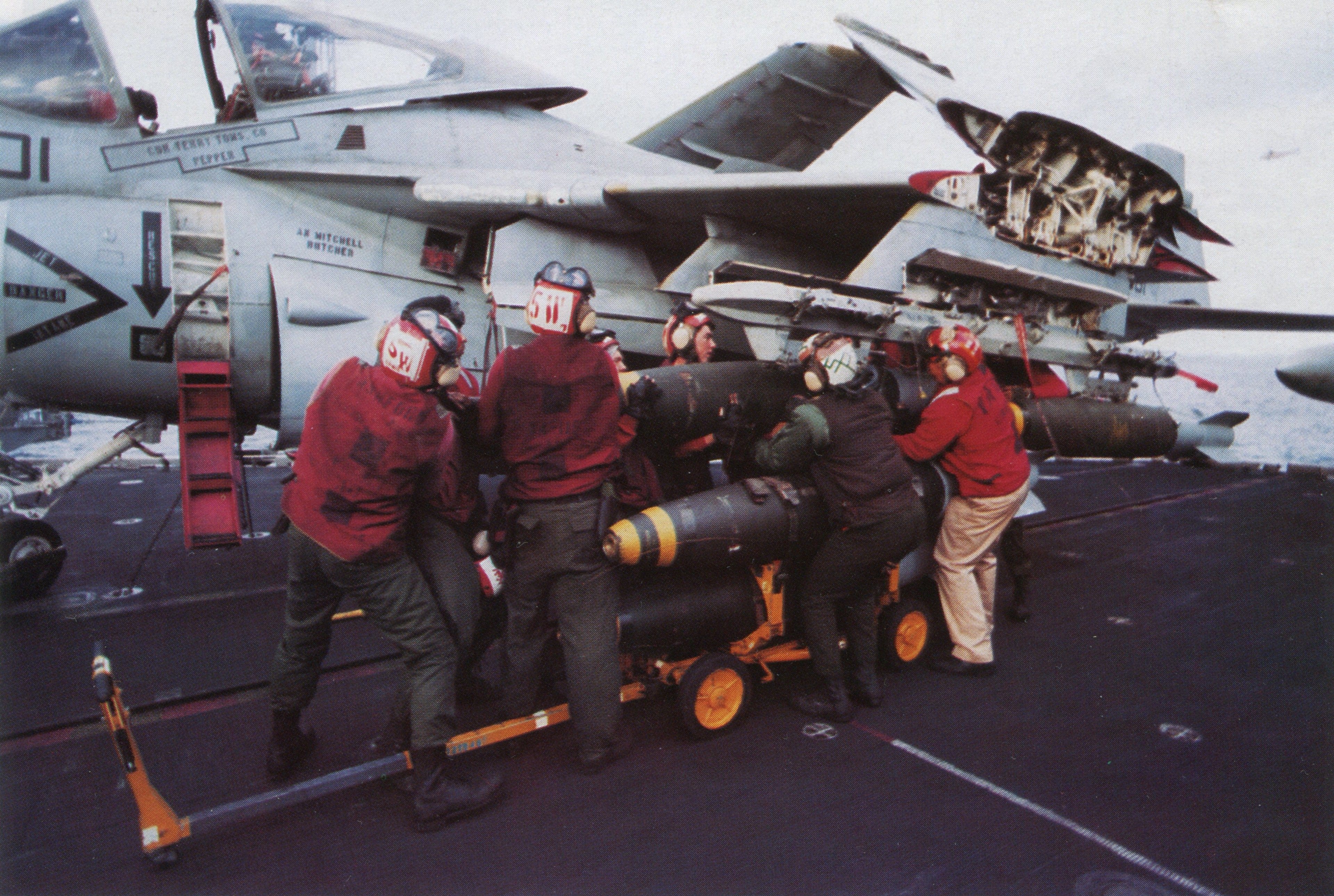 Welcome back to “Karl’s Korner,” a historical segment written by me, Karl Zingheim – Ship Historian of the USS Midway Museum.

In honor of the 30th Anniversary of Operation Desert Storm, I took a moment to reflect on Midway’s involvement as the flagship for all naval aircraft carrier battle groups in the Persian Gulf during this time. Keep reading to learn about more about this historic event…

On Jan. 17,1991, aircraft from Carrier Air Wing 5 launched from the flight deck of the Midway initiating the combat air campaign against Iraq to prepare the battlefield for the pending coalition of nations’ counter-invasion and the liberation of Kuwait.  This was in response to the surprise attack and seizure of the small oil-rich kingdom by Iraqi dictator Saddam Hussein’s military the previous August.

With the potential of a further Iraqi advance into Saudi Arabia following their invasion of Kuwait, the Bush administration moved rapidly to build a diplomatic and military coalition of nations to reverse Saddam’s fait accompli in Kuwait.  Should diplomatic pressure fail, military means would have to be employed to forcibly eject Iraqi troops from Kuwait. The immediate concern was safeguarding the Saudi oil fields, so began Operation Desert Shield, the largest multi-service mobilization since the early Cold War.

For the Midway, however, her career was officially nearing the end. The rapid collapse of communism after the fall of the Berlin Wall in 1989 rendered the Cold War moot, and the Midway, after nearly 50 years of service, was slated for decommissioning.  The aging carrier was not going to just quietly fade away and on Oct. 2, cast off from her homeport in Yokosuka, Japan and set a course for the Persian Gulf.

Arriving on Nov. 1, the Midway relieved the USS Independence battlegroup to watch over the oil fields.  With military action becoming more likely, the Midway was joined by the USS Ranger and the USS Theodore Roosevelt battlegroups the following month. Despite her age, the Midway remained the flagship for the mounting naval forces in the Gulf region.

An early issue was the nature of the strike operations against Iraq.  More than 15 years had passed since sustained carrier operations were conducted against an adversary, and technology on both sides had significantly improved.  Giving Iraqi defenses the minimum warning time for incoming attacks was important, but the matter of both a confined seaway in the Gulf and the uncertainty of Iran’s involvement in the event of combat complicated matters.  Capt. Art Cebrowski, Midway’s commanding officer, was confident, however, the Midway could navigate the northern waters of the Gulf and contend with any threats from either Iraq or Iran.  Getting the ship close to Iraq, in case of war, would enhance Air Wing 5’s capacity for surprise and a maximal sortie rate.

As Saddam balked at calls for a unilateral withdrawal, the deadline of Jan. 16, 1991 passed. The “Air War” commenced the following day. For most Americans, the Air War began with Tomahawk cruise missile strikes and stealth fighter attacks around the CNN rooms of the Al Rashid Hotel in downtown Baghdad, but the Midway’s A-6E Intruders attack aircraft from VA-185 were among the very first allied warplanes to go “feet dry” over enemy soil.  For the next 42 straight nights, the Midway’s aircraft, along with the other carrier groups and land-based planes from the coalition, systematically pounded Iraqi homeland defenses and inside Kuwait, steadily eroding Saddam’s capacity to direct his forces and for them to resist.

Despite being equipped with just two catapults, the Midway’s air wing flew more combat sorties, 3,383, than their larger companion carriers.  This was largely because of the unique nature of having the Midway and her air wing operating in concert for years.  Flight deck operations were fluid, and although live ordnance was being sent aloft in record numbers (approximately four million pounds) around the clock, no mishaps from either accidents or enemy action, resulted.

On Feb. 15, U.S.-led coalition forces initiated the ground invasion, and in just 100 hours drove Iraqi forces entirely out of Kuwait. Saddam’s forces fled and his government sued for peace. After several days of patrols to ensure compliance with armistice provisions, the Midway and Air Wing 5 returned to Yokosuka, arriving on April 17. Her homecoming was to a rapturous welcome. The Midway and her crew earned a Navy Unit Commendation for Operation Desert Storm, but the high-tech conflict was to be the finale for the veteran Cold War carrier. For the Midway, born of World War II, the scrapyard now loomed.

Or, so everyone thought…

Thank you for  looking back on this historic anniversary with me. We will continue to share posts on our social media channels reflecting on Operation Desert Storm. Follow us on Facebook, Twitter, and Instagram to continue to look back with us. Please leave me a comment below and tell me what you thought of this month’s Karl’s Korner. Did you serve aboard Midway during Operation Desert Storm? Leave me a comment below!

The Mysterious Disappearance of Navy Flight 19

Hello, Midway Family! Welcome back to “Karl’s Korner”, a historical segment written by myself, Karl Zingheim – Ship Historian of...