“Rosie” and the First Carrier Midway

In light of March being National Women’s History Month and March 21 being National Rosie the Riveter Day, I am proud to share a look back in time highlighting “Rosie” and the first carrier!

The 1930s and early 1940s were challenging times for both employers and those seeking work. The Great Depression so devastated the labor market that pre-Wall Street Crash employment figures were not attained again until 1943! The shortage of jobs for most of the 1930s disrupted families and caused dislocations across the nation in an era before people moved around the country often. Although rearmament for the looming Second World War after 1937 eased the stress on employment, the onset of full participation in the conflict after the attack on Pearl Harbor in 1941 meant that masses of working age younger males were drawn into the armed forces instead. Furthermore, many manufacturing jobs needed to be converted from producing consumer items, like sewing machines, to turning out war materiel, such as machine guns. This diversion of traditional workers and the conversion of products and processes meant that employers needed to turn towards unconventional sources of labor.

One employer was Henry J. Kaiser, an industrialist who specialized in large projects such as the construction of the Hoover and Grand Coulee Dams. A noted innovator, Kaiser took on the task of mass producing cargo ships, in part to help replace losses inflicted by rampaging German U-boats over the preceding two years and to help build up the vast fleet of merchantmen necessary to sustain an expanded war effort around the world. This ambitious assignment required some inventiveness as well, since the existing shipbuilding establishment was already swamped with orders, and ship construction was a notoriously time-consuming process.

The solution to the first problem was to construct all-new shipyards, and on the West Coast, Kaiser took leases on or bought outright, waterfront land on the east shore of San Francisco Bay and on the Columbia River. The Kaiser Yard at Vancouver, Washington, directly across from its sister yard on the Oregon side above Portland, produced cargo ships of the Liberty and Victory designs. The answer to the second problem on construction time was solved by standardized design and pre-fabricated components. Instead of crafting and installing decks and bulkheads as needed when the ship progressed, entire portions were built to near completion ashore separately as subassemblies, and then transported and lifted into place in the appropriate sequence. This approach shaved weeks and months off more traditional construction schedules, permitting ships to be delivered rapidly—in one case, a complete ship was built in just five days.

An advantage of the prefabrication approach was in its assembly-line methodology: unskilled labor could be brought on to perform less technical tasks, such as drawing out cutting patterns on steel, or in running electrical wiring bundles, without extensive training. The recent development of welding construction not only sped up fabrication and saved ship weight, the process of working a welding torch was much less physically taxing than handing a traditional steel rivet gun. This meant that unconventional, and largely untapped, labor sources could be usefully employed: minorities, women, and occasionally, adolescent minors.

The prospect of higher wages working a shift on one of Kaiser’s shipyards, as opposed to other jobs such as farming or clerical work, led to an influx of newcomers to the Pacific coast. Existing communities swelled, and entirely new ones sprang up, each requiring expanded utilities, housing, food, and schools. Before very long, Kaiser established medical insurance and care for his burgeoning army of workers, which in turn, became the Kaiser Permanente program. To turn out the ships rapidly, these largely unskilled arrivals would receive a systematic indoctrination, aptitude assessments, and training in the basic use of tools and welding equipment. Repetitive or more routine tasks would be assigned to these workers, while skilled and experienced personnel would handle more critical tasks, such as load-bearing structure assembly, or in quality control inspections. 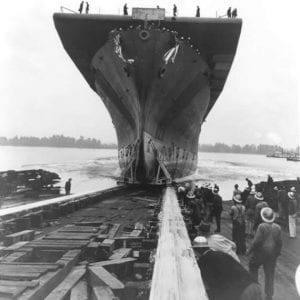 Kaiser’s success with cargo ships led to the production of a new type of aircraft carrier. Eventually called the escort carrier, or CVE, this small design was employed as an aircraft transport, as a platform of submarine-hunting aircraft in the Atlantic, and as a close air support base for the island-hopping campaigns in the Pacific. Kaiser adapted his construction methods to producing the Casablanca-class of escort carriers, including one labeled CVE-63 in his Vancouver yard. Originally called Chapin Bay when started in January 1943, this new hull later took on a more memorable moniker of Midway three months later, in keeping with a nomenclature system that assigned the names of recent battles to escort carriers. Progressing rapidly, the new USS Midway was commissioned on 23 October 1943 (pictured), a testament to the hard-charging efforts of the untraditional workforce of women and others who blazed new trails of opportunity.

The new carrier proceeded with shakedown trials and carried out initial assignments in ferrying replacement aircraft to the war zone. The Midway was on hand for the invasion and conquest of the Marianas in the summer of 1944 before joining the Seventh Fleet supporting General MacArthur’s advance towards the Philippines. On 10 October, the crew received word that the ship’s name was officially changed to St. Lo to commemorate an important battle in the Normandy campaign in order to free the Midway name for a certain large carrier being built in Virginia. The USS St. Lo covered the landings of MacArthur’s army on Leyte and was part of a task group, known as Taffy Three, patrolling off the neighboring island of Samar, when a powerful force of Japanese battleships and cruisers appeared on the horizon after dawn on 25
October.

In a desperate ninety-minute fight, the slow escort carriers ran as best as they could, launching every aircraft they had while dodging towering shell splashes from the heavy Japanese ships. Screening destroyers and smaller destroyer escorts repeatedly charged at their tormentors, joining the aircraft from their charges, as well as from two other escort carrier groups to crippled a few of the attacking cruisers. By the time the Japanese force drew away, two destroyers, a destroyer escort, and one escort carrier, the Gambier Bay, were sent to the bottom. It was certainly a hard, trying morning, and not long after the crew of the St. Lo secured from battle stations for a much-need break, a lone Japanese Zero fighter plane dove out of the clouds and crashed into her flight deck in the first official kamikaze attack of the war. Uncontrollable fires broke out after the initial explosion, which rapidly spread to her bomb and torpedo storage. More explosions erupted, and within a half hour, the ship was beyond saving. Some 776 men were saved out of a crew of 889, though 30 more would die of wounds.

Thanks to a visionary industrialist who ignored traditional practices, new construction technology, and highly-motivated women and minorities who stepped well outside the mainstream when the nation needed them, the Navy had the ships it needed to defeat determined enemies around the world nearly 75 years ago, including little escort carriers like the USS Midway/St. Lo. This combination of citizen-shipcrafters and the citizen-warriors who crewed their ships defeated tyranny and showed the way for generations to come.

If you learned something new or were surprised to hear that there was a “Midway” before us, USS Midway CV-41 – share this with your 2 friends! Thank you for reading.