“Karl’s Korner” is a place for me to share with you – our social media followers, our visitors, and our Midway family – slices of history from my screen to yours! I welcome and encourage anyone who reads this monthly historic segment to comment below, like, and share with your communities.

This month, in celebration of African American History Month I will highlight the influential crew of the USS Mason and how this crew led to another important step in wartime desegregation. It is my pleasure to invite you all to look back with me…

Seafaring has always been an international, and inter-racial, profession, even in navies.  The sail-era U. S. Navy was no exception, as hands from virtually every nationality, ethnicity, creed, and religion served aboard warships of the time.  Duties on these ships tended to be labor-intensive, and crew rosters were filled by those willing to go aloft to work the sails and to tend the guns in action.  During the Civil War, escaped slaves signed on with Union blockaders, performing a direct service against the institution of slavery.   However, when the war ended, the new steam technology, and later, more sophisticated means of working the guns, required sailors with higher education, providing naval policymakers of the day an excuse to minimize African-American service in the fleet. 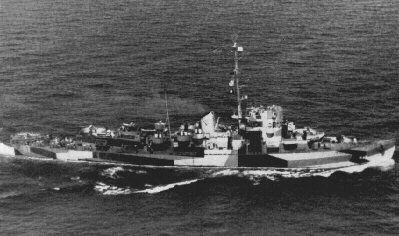 By the turn of the 20th Century, African-American sailors tended to be channeled into more service-related tasks such as working in messes and serving as barbers, much like Filipino enlistees.  In the lean budgetary years of 1919 to 1932, no African-Americans were brought onto the fleet’s rolls at all, with those already in service allowed to remain until retirement.  The start of Franklin Delano Roosevelt’s administration coincided with the resumption of African-American enlistments, but by regulation, only the Mess Steward rating was open to them.  Furthermore, no African-American commissioned officers existed until well into World War II.

Shortly after the attack on Pearl Harbor, President Roosevelt was petitioned by the NAACP to expand the roles African-Americans could serve within the fleet.  Along with the public prodding of First Lady Eleanor Roosevelt, the President directed naval officials to find ways to accommodate much more African-American enlistment in the fleet.  Citing potential disruption of fighting efficiency aboard warships, the Navy Department resisted the suggestion, but eventually proposed a compromise where African-American sailors could serve in expanded capacities at shore commands, on coastal defense vessels, with construction units, and aboard selected Coast Guard cutters.  On 1 June 1942, this compromise became policy, but it took nearly two more years before any warship received African-American crewmen outside of the Mess Steward rating.

On a snowy 20 March 1944, the destroyer escort USS Mason (DE-529) was commissioned at Boston with a largely African-American enlisted complement of 160.  In command was Lieutenant Commander William M. Blackford, a descendant of anti-slavery activist Mary B. M. Blackford of Virginia.  Some in the naval establishment had low expectations for the Mason, whispering the appellation “Eleanor’s Folly” because of the First Lady’s stance.  However, over the course of the next eighteen months, the Mason served competently in the Battle of the Atlantic, guarding convoys against German U-Boats before being selected for special sonar testing as the war drew to a close.  Along with the men of the sub-chaser PC-1264, the Mason’s segregated crew was the Navy’s seagoing contribution to African-American combat experience in World War II, along with the Army Air Force’s Tuskegee Airmen, the Army’s 92nd Infantry Division and 761st Tank Battalion, and African-American Marines in the Pacific.

The armed services were not racially desegregated until 1948 by an executive order from President Harry Truman.  To commemorate the World War II crew of the Mason, the guided-missile destroyer USS Mason (DDG-87) was commissioned in 2003 with the motto “Proudly We Served.”  Like her spiritual namesake, she is assigned to the Atlantic Fleet.’

I hope you enjoyed learning about this crew and the evolution of wartime desegregation. Please leave me a comment below and tell me what you thought of this month’s Karl’s Korner. Did you know about the USS Mason before this post?