The Midway opened in 2004 with a mission to preserve the historic ship and the legacy of those who serve, inspire and educate future generations, and entertain our museum guests.

While all of Midway’s events, programs, and efforts support this goal, there is one special place onboard where education, inspiration, preservation of legacy, and volunteerism unite. Where is this special place, you ask? The USS Midway’s onboard Research Library!

Almost from the USS Midway Museum’s inception, the commitment to preserving the history and knowledge of naval aviation has been centered on the presence of the institution’s own library. Located just above the Hangar Deck level near the Battle of Midway Theatre, the Museum Library is presently home to more than 6,400 volumes, 1,400 ship cruise books (nearly half of them from aircraft carriers dating back to World War II), 1,500 technical manuals, 750 videos in various formats, some 400 vertical files and e-manuals, and more than 5,500 individual magazine issues. Together, these holdings sustain the Museum’s core interests in naval aviation, aircraft carriers, and, naturally, the USS Midway’s heritage. Additionally, other interests in U. S. Navy and Marine Corps operations, training manuals, and reference information on aviation and naval subject matter are maintained. 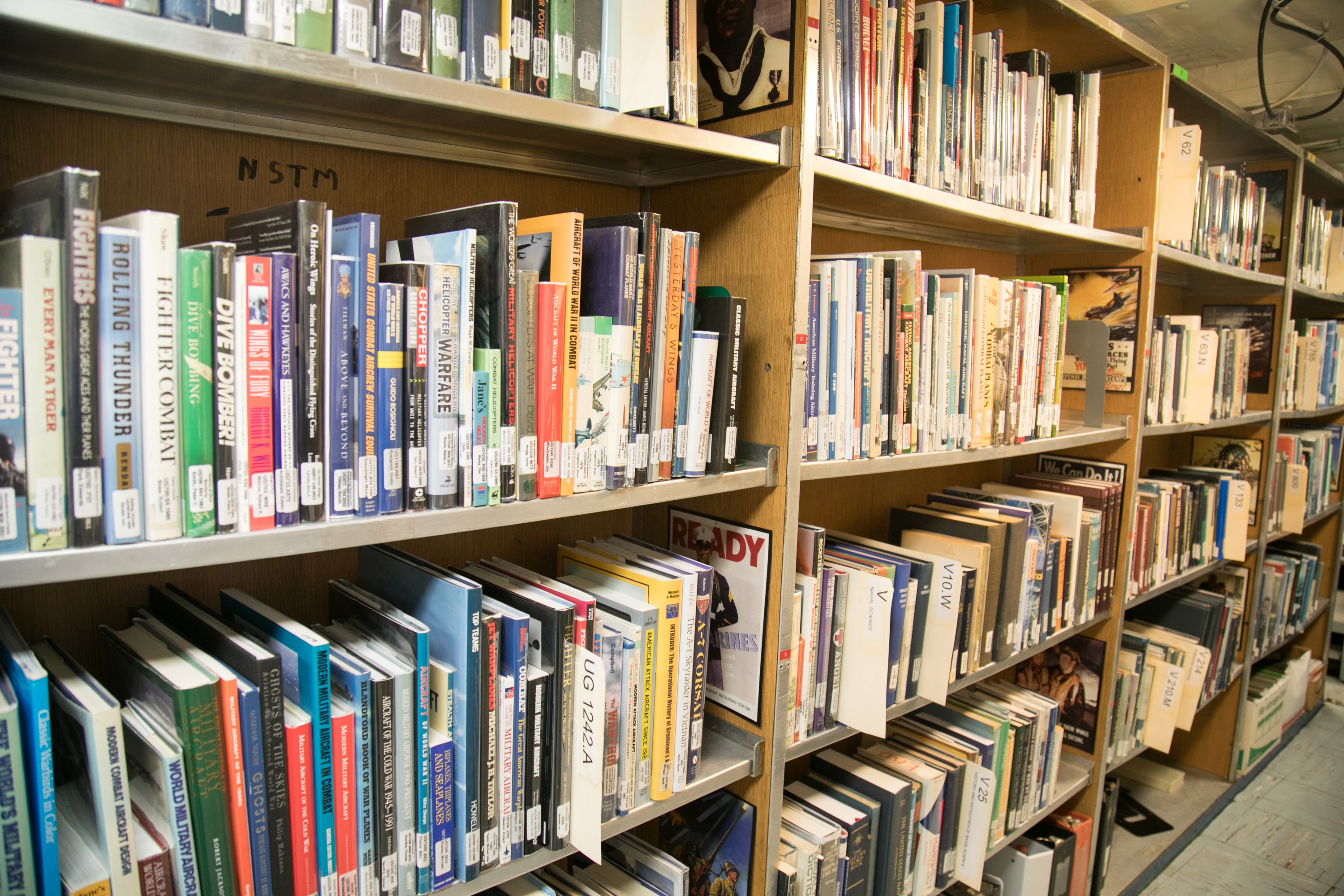 The Library was born of fortunate happenstance just as the Museum was about to open its doors. In the spring of 2004, the final round of naval base closures and command reorganizations that began in the 1990s resulted in the cessation of library activities aboard a few bases in San Diego. The holdings of these now-defunct libraries became surplus and were offered to our fledgling naval museum. Despite the need to prepare the Midway for receiving guests and developing a viable tour route, time was found to send a team to these libraries to find works to stock our own. In this manner, entire sets of volumes were obtained, including one of the most complete sets of the U. S. Naval Institute Proceedings in the western United States.   With but a single volunteer to entrust the organization and stocking of the bare shelves of the Library’s single compartment, the Museum opened with a functioning reference center as well as exhibit attractions.

Today, the Library has expanded into three adjoining annexes along the O-1 Level, opened a used bookstore on the Hangar Deck (behind the F4F Wildcat), and sustains an all-volunteer staff of more than thirty dedicated people and one Havanese-poodle mix. Lead librarians Bonnie Brown and Phil Eakin direct the daily functions of the Library, particularly book accessions, cataloging, and answering research inquiries. Assistant librarians are entrusted with conducting special projects which include compiling a complete crew list of all those who served aboard the Midway, summarizing all entries in the entire Proceedings series from 1879 to present day, updating the magazine and vintage Midway newsletter databases, acquiring and saving Midway deck logs, publishing special works such as The Complete Rhymes of the Midway Mariners—compilations of Midway New Year’s deck log entries composed in verse, running the Library’s Facebook page, producing a searchable database on all magazine contents concerning naval subjects, and maintaining a list of all Midway VIPs and 1,000th-milestone landings. The bookstore nearby has sold more than 4,500 items, currently stocks some 900 titles, and sustains the purchase acquisition program of new books for the Library. 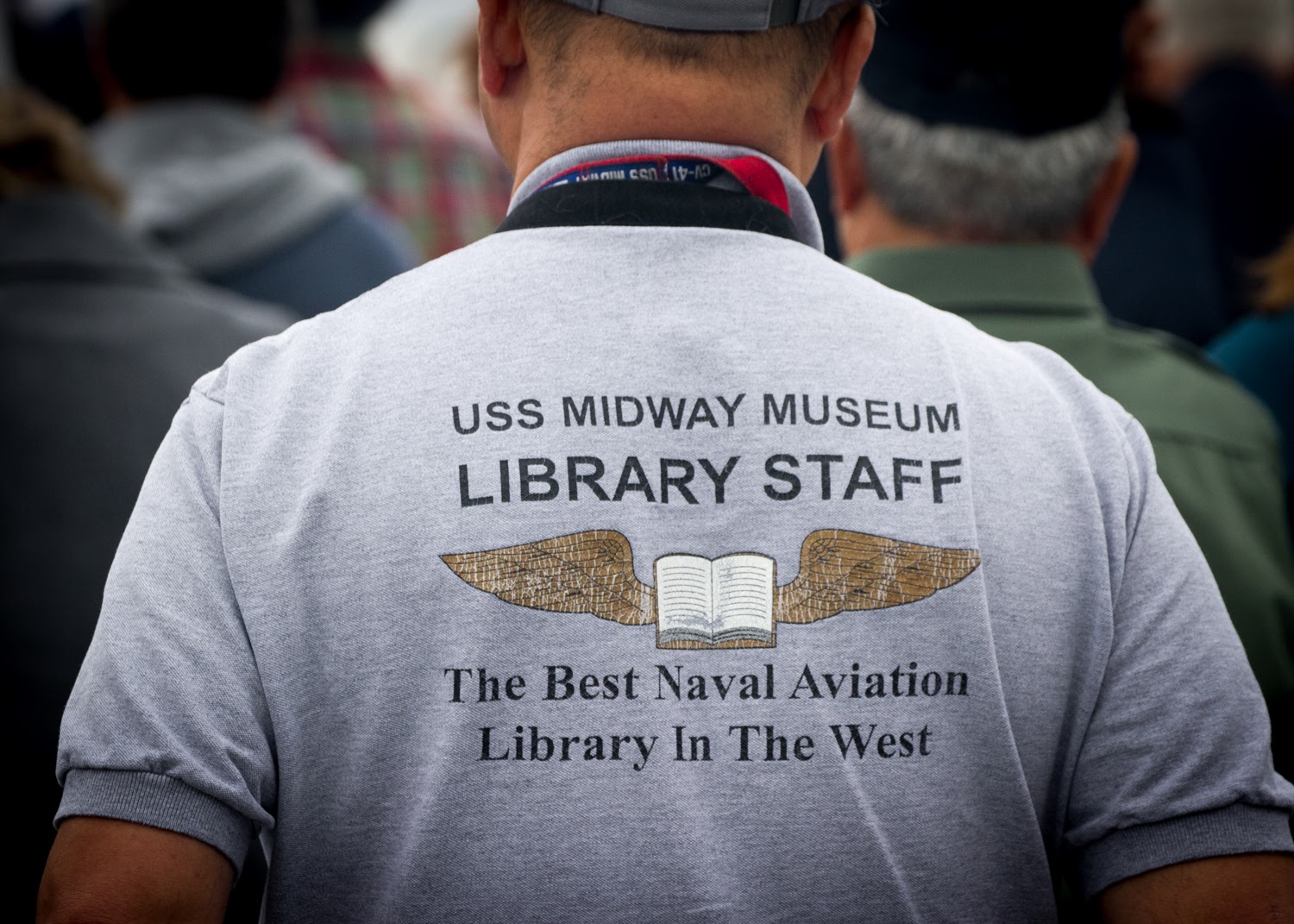 In 2017 the Library set aside space in its entry vestibule just off the Hangar Deck for a special exhibit on the Midway’s own history, including an interactive map of the ship’s voyages around the globe, as well as special video displays covering highlights of her 47-year career. Though the Library is a non-lending institution, it welcomes interested visitors and the staff will enthusiastically address all requests during Museum business hours. Through its emphasis in carrier aviation, special projects, and able research assistance, the USS Midway Library is unquestionably the finest reference center of its kind afloat.

Did you know about our onboard research library? If you learned something new, share this article with your friends who love the Midway too! Click here to learn more about the Library’s projects here. Thank you for reading.