For information on future sponsorship and underwriting opportunities, contact:

First, James C. Kennedy of the James M. Cox family (chairman of Cox Enterprises) and son of Barbara Cox, a World War II widow who christened the USS Midway six months before the war’s end in 1945. Barbara’s lifelong passion for educating children flourishes aboard Midway in the 21st century as the ongoing Cox family support of the museum’s education programs continues to inspire, educate, and prepare young Americans for a life of responsible citizenship and service to community and country.

Second, Lawrence C. Chambers, RADM, USN (Ret.), the first African American to command a Navy jet squadron, first to command a carrier (USS Midway), first aviator to attain flag rank, and who was only the second African American to graduate from the U.S. Naval Academy. He courageously led the USS Midway in Operation Frequent Wind in 1975. Midway’s crew saved thousands of refugee lives in what became the U.S. Navy’s largest humanitarian mission to that time.

Last but not least, Riley Mixson, RADM, USN (Ret.), a former commanding officer in the 1980s of the USS Midway, the first American carrier home ported in a foreign country. Later, in the 1990s, he held a key leadership position in the “Second Battle of Midway,” the successful 12-year campaign against all odds to save the carrier from the scrapyard and bring it to San Diego to become the world’s most-visited naval ship museum.

These three Americans embody the USS Midway’s ongoing efforts to defend and preserve freedom for nearly half a century. They joined a list of prestigious past honorees, who include Bob Hope, Lee Iacocca, Apollo and Gemini Astronauts, the Heroes of the Battle of Midway, John McCain, Bob and Elizabeth Dole, prisoners of war from the Vietnam Era, and many more.

Your financial support helps to ensure that every child in San Diego has access to this amazing academic laboratory, regardless of their school’s financial challenges. Students from nearly every school district in San Diego County participate in our programs. (Averaging 400 programs each school year.) Our popular overnight programs hosts 45 sessions annually.

Our objective is to make sure every child in San Diego County has a chance to Live the Adventure and Honor the Legend!

YOUR SUPPORT MAKES A DIFFERENCE

Unable to participate in the event?

Continue to help us provide every child access to these unique, hands-on learning opportunities by donating to the Midway’s Education Programs.
Click here to donate today.

Jack In The Box 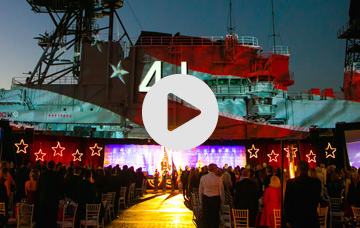 For our FAQ (Frequently Asked Questions) page, please CLICK HERE or feel free to reach out to us!